Jason Statham is a real-life action hero. With a background in competitive high diving, Statham does many of his own stunts and has trained hard to become one of Hollywood’s most physically impressive actors.

However, unlike contemporaries like Dwayne Johnson, Terry Crews, Sylvester Stallone, and Arnold Schwarzenegger, Statham doesn’t look like a muscle-bound bodybuilder. Instead, he’s built like a special forces soldier or an athlete. His physique looks much more attainable.

Statham’s workouts reflect his competitive sports background and also his need to be functionally fit enough to do many of the stunts in his movies. Despite being in his early 50s, he’s still a fit and agile man who shows no sign of slowing down. He might not be the most muscular movie star, but he’s arguably one of the most athletic.

In this article, we lift the lid on the Jason Statham workout and diet plan. However, it’s important to note that Statham’s workouts vary depending on the role he is preparing for. He needs to be bigger and more muscular for some movies, but other parts call for a leaner look.

The workout detailed below is just a snapshot of how Jason Statham was training at a particular point in time, so don’t worry if, another time, you read about him doing something a little different.

Who is Jason Statham? 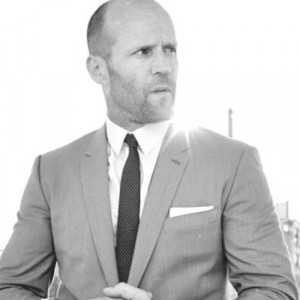 Jason Statham was born on the 26th July 1967 in Derbyshire, England.

Before becoming a successful actor, Brit Statham was a nationally ranked high board diver and finished 12th in the 1992 world championships. He was also a model for French Connection clothing.

Statham broke into acting in 1998 when he auditioned for and got a part in Guy Ritchie’s movie Lock, Stock, and Two Smoking Barrels.

Known mainly for his action roles, other Statham movies include The Expendables and the Fast and Furious films, The Transporter movies, and the remake of The Italian Job.

In addition to his high diving background, Jason Statham is a trained martial artist with expertise in Wing Chung Kung Fu, kickboxing, karate, and Brazilian Jujitsu.

He is also a skilled driver, often doing his own car stunts. He is also an experienced rock climber.

Despite looking physically impressive on-screen, Statham is just 5’ 10” and usually weighs between 165-175 lbs. However, because he’s so lean, he looks much more muscular.

As mentioned, the Jason Statham workout changes according to the role he’s preparing for. That said, here is a typical workout week for Jason Statham.

No exercise builds muscle and strength like the deadlift. For this workout, Statham ramps up to his one repetition maximum, trying to lift a little more weight week by week. For example:

On completion, Statham gets back to his gymnastic and diving roots by spending 10-15 minutes using a full-sized trampoline and working on his aerial agility. 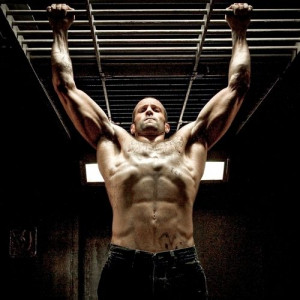 Today’s workout is all about burning fat, building muscle, and improving fitness. While the exercises change, this workout is usually against the clock, and Statham always does his best to beat his last time.

One of his favorite workouts is called the Big 55 Circuit.

This workout is designed to burn fat and build fitness and endurance. While Statham uses a range of equipment for his interval workouts, he prefers rowing because it’s low impact and easy on his joints.

Typically, this workout involves six intervals of 500 meters, with 2-3 minutes of easy-paced rowing between each effort.

Today’s workout uses the 5 sets of 5 reps training method, which is a proven way to build muscle and strength. For this session, Statham uses the same weight for each set. He prefers front squats over back squats because they have a greater crossover to improved athletic performance.

This workout finishes with 200 push-ups, done in as few sets as possible. 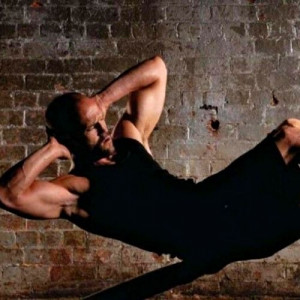 Statham chooses 8-12 exercises for this workout and does them back to back to burn fat, build endurance, and increase muscle size.

These workouts are flexible and change often, but here’s an example:

Contrary to what the name suggests, this is a day for 1-2 hours of unstructured exercise. The rule is this has got to be something you enjoy. Examples include hiking, swimming, playing sports, horse riding, and bike riding. For Statham, this day usually means going for an 8-mile run in the mountains near his home.

Take the day off; you deserve it!

Statham’s diet is designed to support his workouts, give him plenty of energy, and help him stay lean. Healthy eating is also essential. Like most people, he eats a range of foods and changes his diet based on his mood and hunger levels and whether he’s at home or on location. 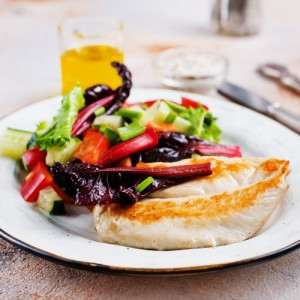 However, a typical day in the diet of Jason Statham usually looks something like this:

It’s probably not the most exciting diet in the world but, judging by how lean Statham is, it’s clearly an approach that works.

Jason Statham’s shaved head makes him hard to age. After all, with no grey hair or bald patch showing, it’s much harder to guess how old someone is! Judging from his physique alone, it would be easy to mistake Jason Statham for a man at least 20 years younger.

However, this is no fluke of genetics or the result of surgery. Instead, Statham looks the way he does because of hard, consistent workouts and a strict but healthy diet.

Despite being in his early 50s, Jason Statham is still killing it in the gym and follows a very balanced yet holistic training program. You won’t find many other people doing deadlifts followed by somersaults on a full-sized treadmill!

You probably won’t be able to follow Statham’s workout as it’s written, but that doesn’t mean you can’t take inspiration from it or borrow a few elements and add them to your own workouts.

For example, you could start adding fat-burning conditioning workouts to your usual bodybuilding split routine or dedicating a workout per week to just doing something you enjoy.

Food-wise, the Statham diet is clean and straightforward. If you can tolerate such a plain eating plan, it would undoubtedly help you lose weight while providing the energy you need to fuel your workouts.

While you probably will never look like Jason Statham, you won’t know unless you try. Use the information in this article to write your own-Statham inspired workout. Visit the Fitness Equipment Reviews homepage for more expert guidance.

How To Use Mass Gainer And Build Muscle