Working out can be a challenge – mentally and physically. A lot of people struggle to hit the 150 minutes per week of moderate exercise that most experts recommend. But, for every 100,000 people who find exercise a chore, there is one person who thrives on working out – the longer and the harder, the better.

These are the people who run ultra-marathons, set endurance records, swim oceans, or compete in things like Ironman triathlons or the Tour de France bike race.

While you may never want (or be able to) emulate the incredible feats of fitness of an elite few, it’s always entertaining and motivating to read about them. After all, if THEY can run 100 miles across an arid desert, YOU can drag yourself up and out for a jog around the block a couple of times a week, right?

One of the most impressive and inspirational people in the world of endurance sports is David Goggins. Ex-soldier Goggins has completed some insane fitness challenges, despite having once been obese, suffering from asthma, and having been diagnosed with a hole in his heart.

In this article, we take a look at the David Goggins workout routine and discuss his diet.

Who Is David Goggins? 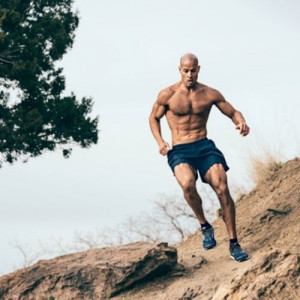 He is the only armed forces member ever to have completed SEAL training, the US Army Ranger School, and the US Air Force’s Tactical Air Controller training.

He served in Iraq and Afghanistan, receiving several awards and decorations for his service.

After his 20-year military career, David Goggins become a sought-after motivational speaker and has written a book about mental toughness, determination, and motivation called You Can’t Hurt Me.

One of the most dominant endurance athletes on the planet, Goggins has completed over 60 ultra-marathons (any race over 26.2 miles), usually finishing in the top five, including the Badwater marathon, which is a 135-mile race across the aptly-named Death Valley, which he has done twice.

Goggins is not just a runner; he swims and cycles too. He also held the record for most pull-ups – doing an incredible 4,030 in 17 hours.

David Goggin’s workout philosophy is pretty simple – he believes that the human body will go on for as long as the mind drives it. According to Goggins, “The pain that you are willing to endure is measured by how bad you want it.” It’s clear from his achievements that, whatever IT is, Goggins wants it pretty bad.

If you came here looking for a workout routine to follow, you’re probably going to be disappointed! David Goggins is not just a full-time athlete; he’s also one of the most established endurance athletes on the planet – very few people would be able to hang with him on even one of his more leisurely workout days.

That said, for motivational purposes, this is a typical training week for David Goggins.

Unsurprisingly, endurance athlete Goggins spends a lot of time doing cardio. In fact, “a lot” is something of an understatement as what David Goggins does in a day is more than most people do in a week.

Most days of the week, Goggins does the following:

To keep his core strong, David Goggins also does a daily abs workout. While the exercises vary, his routine normally looks something like this:

Unlike a lot of endurance athletes, David Goggins is pretty muscular and strong. No doubt this has helped him ward off injury. Several times a week, Goggins supplements his cardio workouts and hits the gym to lifts weights. An average strength training for Goggins looks like this:

This all adds up to a whole lot of exercise for David Goggins! But, before trying to emulate him, it’s important to remember that he’s spent many years working up to this amount of training and is blessed with excellent training and recovery genetics.

So, by all means, marvel at what this world-class endurance athlete does to stay in record-breaking shape, but don’t try to copy him unless you are already a very experienced exerciser.

What Does David Goggins Eat in A Day?

To fuel hours of workouts, you’d expect that David Goggins spends as much time eating as he does training. However, the opposite is true. Instead, Goggins eats quite sparingly and follows a ketogenic, intermittent fasting diet.

A ketogenic diet means he eats less than 50 grams of carbs per day, while intermittent fasting involves skipping breakfast and lunch and restricting eating to an eight-hour window.

Like most people, David Goggins eats different foods based on how he’s feeling and whether he’s at work or at home. That said, an average day of eating looks like this for Goggins:

Toughness comes in all shapes and sizes. Fighters, footballers, and hockey players are tough because their sports invariably involve lots of intense physical contact. You can play contact sports and not be tough.

But, on the flipside, ultra-endurance athletes are tough too. They don’t have to contend with being hit by other competitors, but they do have to battle with themselves to keep going when every muscle is screaming at them to stop.

Recreational exercisers can be tough too. It takes determination and discipline to work out when you don’t feel like it and put your workout ahead of your natural inclination to binge-watch Netflix and drink beer after work instead of going for a run.

There is no denying that David Goggins is tough. Just a quick look at his many sporting achievements shows just how tough he is.

But, to say he was the toughest man alive would be disingenuous to all the other people who demonstrate a steely resolve and push themselves to their limits. However, if toughness was measurable, it’s a safe bet that David Goggins has got more than his fair share!

Believe it or not, David Goggins was once obese. As a junior airman, he weighed close to 300 lbs. However, he set his mind to joining the navy SEALs and committed to not just shedding over 100 lbs but getting as fit as humanly possible.

20+ years later, Goggins is still putting his body through hell, pushing himself to the very limits of endurance.

You don’t get to be a champion endurance athlete, Navy Seal, Army Ranger, and Air Force Tactical Air Controller through sheer hard work alone. You need some pretty remarkable genetics, too. But there is no denying that David Goggins has incredible willpower, motivation, and determination. He’s a man who won’t let himself be beaten, even by himself.

David Goggin’s workout and diet plan aren’t for everyone. In fact, they’re probably not suitable for anyone other than Goggins himself. But, they’re a testament to what the human body can do, given the right circumstances and an unbreakable mindset.

While you probably shouldn’t try and emulate David Goggins, there is nothing wrong with trying to follow in his motivational footsteps. If you feel like skipping your next workout, just ask yourself, “WWDGD?” – what would David Goggins do?

Invariably, the answer is get up, head out and train anyway!