Back in the late 1980s and early 1990s, actors with superhero-worthy physiques were few and far between. Arnold Schwarzenegger and Sylvester Stallone were Hollywood’s “muscle men,” and it was a very exclusive gang. A few ex-athletes and bodybuilders could give Arnie and Sly a run for their money, but, really, there wasn’t a whole lot of competition.

Fast forward to 2010 onward, and it’s hard to count how many actors now look like they’ve stepped out of a comic book. Thanks to the dominance of movies from Marvel and D.C., more and more actors have to get into amazing shape to play superheroes on the silver screen.

Some, like the Hulk, are the product of fantastic CGI, while others wear padded suits to make them look more impressive. But many action movie actors are the real deal and have built physiques to make their on-screen feats of strength much more believable.

Sculpting a superhero body requires dedication to training and nutrition, and one of the most impressive physiques belongs to Australian actor Chris Hemsworth. Fans want to know what Hemsworth did to build his body to play Thor, the god of thunder.

In this article, we discuss the Chris Hemsworth diet and training plan.

Who is Chris Hemsworth? 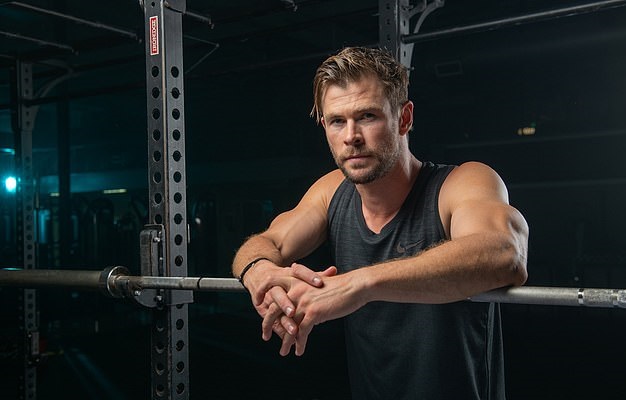 Christopher Hemsworth is an Australian actor best known for playing the superhero and Norse god of thunder Thor, a part he’s been playing since 2011.

Like a lot of Australian actors, Hemsworth started out in the TV soap Home and Away. His first Hollywood role was playing George Kirk, James T. Kirk’s father, in the 2009 reboot of the Star Trek Franchise.

Born in 1983 in Malborne, Hemsworth was always into sports and a relatively muscular individual but is reported to have bulked up by 20-30 pounds to play Thor. He is often featured on the cover of fitness magazines and has a physique that many people aspire to.

Since and because of his famous diet and training regimen, Chris Hemsworth has since launched a workout and nutrition app called center, which is designed to help even non-superheroes get into great shape.

What Chris Hemsworth Eats in a Day?

Building and maintaining a significant amount of muscle while staying lean is no mean feat. Eat too little, and you won’t gain muscle. Eat too much, and you run the risk of obscuring that muscle with a layer of unsightly fat.

Hemsworth achieves his training and nutrition goals by eating big but also eating clean. This ensures that the supplies his body with the energy and nutrients it needs without the caloric excess that would lead to fat gain.

Typically, Chris Hemsworth eats 6-8 times a day to provide his muscles with a constant stream of energy and nutrients. During the lead to up to a movie, he increases his food intake to promote muscle growth. But, between films, he purposely eats a little less so he can slim down avoid weight gain when he dials back his workouts.

So, what does the actor who plays Thor eat? Here’s an average day in the diet of Chris Hemsworth:

8am: Greens shake with protein powder

10am: Eggs, avocado, and toast

7pm: Whitefish, green salad, and cruciferous vegetables such as cauliflower and broccoli

Hemsworth doesn’t use a lot of supplements, and those that he does use are chosen to boost his recovery, workout performance, and health. Depending on where he is in his movie preparation, he’ll use creatine, branch chained amino acids, protein powder, essential fatty acids, ZMA, a pre-workout, and greens powders in varying amounts.

In summary, the Chris Hemsworth diet is high in protein, contains moderate amounts of carbs and healthy fats, and is very natural. As such, what Hemsworth eats is very nutritious, so he doesn’t need a whole lot of supplements.

As celebrity diets go, this is one of the healthiest, most sensible diets you could follow. But if you aren’t training hard, heavy, and often, eating this much food could soon lead to weight gain. 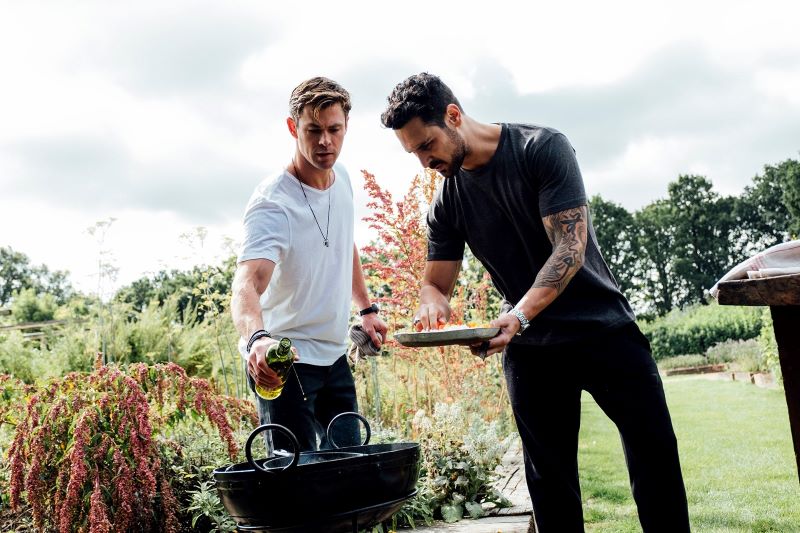 Being an Australian, Chris Hemsworth was all-but raised cooking food on a barbeque, and that means plenty of fish and meat. He is most definitely NOT a vegetarian.

In fact, given the amount of protein he needs and his preference for not over-eating carbs, it would be impractical for the Thor actor to be anything but omnivorous.

Most meals feature some form of animal protein, from meat to fish to eggs. This is partly why he doesn’t use a whole lot of protein powder. Eating animal foods may be a controversial choice in Hollywood, where a lot of people have embraced plant-based diets, but for strength and muscle mass, meat is hard to beat.

To sculpt his superhero physique, Hemsworth trains under the supervision of trainer Luke Zocchi. His workouts are designed to be functional and improve fitness, endurance, power, and agility, as well as create plenty of superhero muscle mass.

Why worry about functionality when a lot of Thor’s feats of strength are done using CGI? That’s because Chris Hemsworth does many of his own stunts, and even with computer-aided graphics, he still needs to be able to run, jump, dive, roll, kick, and punch believably.

It also helps protect him from the injuries that could shut shooting down for weeks, costing millions of dollars and putting the movie behind schedule.

Chris Harmsworth’s workouts change and depend on whether he’s trying to build and bulk up, maintain muscle mass, or slim down, and usually involve a mixture of training methods.

He’s not a fan of traditional slow-paced cardio, so Hemsworth tries to include high-intensity training in his strength workouts to effectively kill two birds with one stone, allowing him to get and stay lean while building muscle. Some of his favorite conditioning methods include:

Training with such high intensity means Chris Hemsworth tends to keep his workouts to an hour or less but, to get the results he wants from so little time in the gym, this means there is no such thing as an easy workout for the Thor actor.

While Hemsworth has followed a daily bodybuilding-type split to build muscle, i.e., chest on Monday, back on Tuesday, legs on Wednesday, etc., he’s just as likely to rotate through several different types of workouts to make sure he doesn’t get bored or stuck in a workout rut, such as:

For fat loss, Hemsworth may increase his workout frequency to twice per day, but only for a few weeks at a time, and never for more than an hour per session. Training for longer could result in aches, pains, injuries, and overtraining.

He generally works out five days a week, which is sustainable, allows time for recovery and muscle growth, and means that he isn’t committed to spending every day in the gym, which could soon become boring.

How Much Does Chris Hemsworth Bench Press? 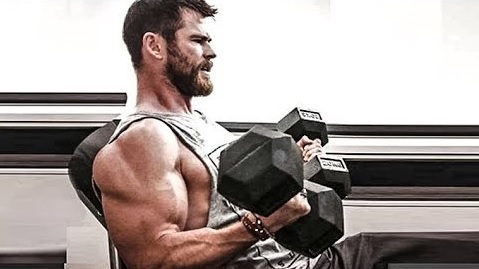 Despite being one of the most jacked actors in Hollywood, and one of the strongest, Chris Hemsworth has been reported saying he doesn’t actually do bench presses.

He DID bench press at the start of his career playing Thor but concluded it was boring and not very functional.

After all, his character would never “bench shove” a bad guy! That said, it would be a safe bet to say that if he had to, Hemsworth should be able to do several reps with his body weight on the bar, which is usually around 215-225 lbs.

Instead of bench presses, Hemsworth an ardent fan of push-ups, which work the same muscles as the bench press. Rather than do low reps with heavyweights, he prefers to pump out multiple sets of 30-50 reps to build his chest, triceps, and shoulders.

A lot of Hollywood celebrities follow workouts and diets that simply make no sense. It seems that in Hollywood, the weirder the workout, the more followers it gets. That’s a real problem when so many people get their fitness information from stars of the stage and screen and not exercise professionals.

That said, Chris Hemsworth has adopted and developed a very sensible approach to both diet and nutrition. There are no fads, and there is nothing to suggest that he’s ever fallen into the trap of doing exotic workouts or following pointless diets. His is a very common-sense approach to food and exercise.

That said, after over a decade of training, Chris Hemsworth is a very experienced exerciser, and his workouts and diet are not suitable for beginners. Eating six large, high-protein meals per day is something you need to work up to. And, if you don’t combine the Hemsworth diet with an equally intense workout regimen, the only thing you’ll gain is fat.

To that end, by all means, follow the Hemsworth diet and workout program, but stay true to the spirit of them, rather than copy them exactly. Remember, too, that working out and eating right is a part of Chris Harmsworth’s life – he gets paid to do these things. When you get paid millions of dollars to get and stay in shape, your motivation levels are bound to stay higher for longer.

But, if you want to emulate a movie star’s workout and diet, Chris Hemsworth could be an excellent role model.

The Benefits of Deadlifts